Long-Range Drone Delivery soon to become a reality in India 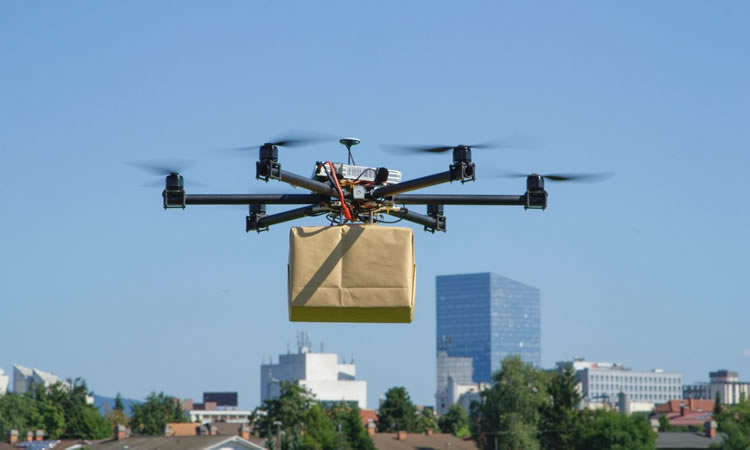 Long-Range Drone Delivery soon to become a reality in India

The use of drone delivery in India, which once seemed like a distant dream, might soon see the light of the day. As per the government officials and company executives, India is set to witness the first experimental long-range drone flight in parts of Karnataka, Tamil Nadu, Rajasthan and Punjab, later this month.

These drones are permitted to fly up to 20 kms at one stretch and will mark a first for the country which currently only permits drone flights within the visual line of sight (VLOS) or 450 metres from the operator.

As per reports, a consortium of companies led by global drone services provider ANRA Technologies later this week will be seen flying pilot deliveries of medicines in tie-up with the Indian Institute of Technology Ropar and experiment with delivery of online food orders along with Swiggy in Jawra, Rajasthan.

Also, teams led by Throttle Aerospace and Daksha Unmanned Systems will pilot deliveries of medicines in Gauribidanur in Karnataka and Thiruvalluvar outside Chennai, respectively.

It was earlier in May 2019 that the Directorate General of Civil Aviation expressed interest to conduct experimental BVLOS (beyond visual line of sight) drone flights with an aim to gather learnings ahead of framing regulations to govern drone-based deliveries and other long-range drone use cases in the nation.

“We hope to release the draft guidelines for public feedback by Dec 31, 2021 and the final guidelines by Mar 31, 2022,” said Amber Dubey, joint secretary at the Ministry of Civil Aviation.

He added, that these experimental flights are key to gathering data for framing of effective BVLOS rules.

Throttle Aerospace, which will launch its experimental flight on June 21, is expected to conduct a pre-trial on June 18-19 before the formal launch. The company has partnered with Narayana Healthcare to carry out tests for delivering medicines to specific points.

Our software will generate on-demand deliveries, which our service team will need to pack and load onto the correct drone. The drones will then autonomously take off, fly to the destination and land,” said
~ Nagendran Kandasamy, CEO at Throttle Aerospace

“The DGCA has asked us to try a winching system also, where our drone will hover at a certain height and through a tether the medicine delivery box will be lowered,” he added.

Daksha Unmanned Systems is also looking forward to commence the trials before the final launch in the coming weekend.

We’ll be doing various activities such as mapping of the area and material movements over a short distance over a span of 20-30 days. In the future, we want to use this technology mainly for medicine movements,”
~ Ramanathan N, CEO, Daksha Unmanned Systems

Of the 34 consortiums that had expressed interest to participate in the BVLOS experiments, the BEAM Committee had granted the initial approval to 20, including those floated by budget airline SpiceJet, Nandan Nilekani-backed ShopX and Google-backed Dunzo.

Amit Ganjoo, CEO of ANRA Technologies, which will utilise its SmartSkies platform to manage the drone operations, similar to the systems it has deployed in other countries as well,while speaking on drone deliveries in India said that India is a little behind, despite all this push from the centre.

“In many parts of the US and Europe, innovation and experimentation started happening back in 2015 and now the rules are falling in place and they are operationalising the small UAS (unmanned aircraft system) segment. You won’t see last-mile deliveries, but at least mid-mile logistics and surveillance there,” he said.

So far, only ANRA, Throttle Aerospace and Daksha Unmanned Systems have received the final go-ahead.

As the country reels under lockdown and curfew like restrictions due to the pandemic, India is vouching on the idea of delivering vaccines and medicines using drones.

State governments across the nation are collaborating with logistics and tech company’s to give a trial run and eventually run successful deliveries of medicines and vaccines via drones to the remote areas of the nation.